Willingness to pay distance decay functions are a critical link in the CBA-BIM story. They link how much people value infrastructure based on distance, use and income. This is critical in geographical-based business case analysis because we want to know which location for infrastructure will generate the most use and how it may be useful or harmful in addressing social equity.

“Our main conclusion is that distance decay relationships may well prove very useful in applied valuation work, since they provide a natural way of conceptualising the question ‘who benefits?'”1

Distance Make the Heart Grow Fonder and the WTP Smaller

By explicitly incorporating the spatial dimension, a GIS based approach claims to eliminate the need for an arbitrary definition of the aggregation population. This is somewhat true and although the WTP estimate can be somewhat data driven, there are still some decisions to be made by the modeller.

“Provided the valuation study includes the relevant functions it is possible, using relatively simple GIS techniques, for a more sophisticated valuation analysis to be carried out that takes into account how WTP can vary by distance from the policy site and other characteristics that can affect WTP such as household income levels.”4

The most commonly found approach is the distance decay function that has WTP decrease, for example, as the distance to a transit station increases. The UK guidance has a fictitious example of WTP for a theoretical quarry in the centre of a National Park which has created a large intrusive scar on the Park’s landscape. The government wishes to close the quarry but will need to purchase the mineral rights. To calculate the benefits of this action the impacts of the proposed action on the landscape must be valued, and in order to do this a combination of economic valuation evidence and GIS is applied.”5

There are 8,266 households within a 5 mile (8 km) radius of the proposed quarry:

A linear distance decay function is estimated from a survey of the household next to the quarry (mean WTP = £26.46/year) at households on the boundary of this area (mean WTP = £5.66/year)6:

Other functional forms than linear are of course possible so WTP decay functions are not always entirely determined by the data. For example the same information could be used to fit a non-linear trend:

In fact the non-linear distance decay function is favored in the literature.

As I mentioned in an earlier post equity issues can be addressed by distance decay functions.

Other variables can be included:

Most researchers try these added variables but often distance dominates the results. Sometimes income can have an effect and sometimes users versus non-users is a useful distinction.

For example from Table 12 in Bateman et. al. (2001) their equation controls for unemployment, retired, knowledge of the issue (low water flow in this case), and the size of the proposed solution (small, medium, or large):

A summary of the estimated elasticities8 from the literature can be used to give ranges for the WTP, different estimates based on income, and differing WTP values for users and non-users. These can be chosen (linear when estimate goes to zero, or constant elasticity – the log/log formulation – when effect persists over longer distances) and calibrated to local studies where available. 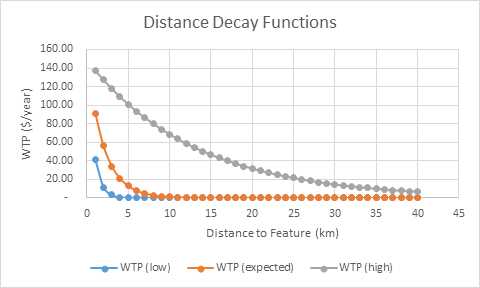 Figure 10: WTP Distance Decay Functions Based on the Range of Constant Elasticity Estimates in the Literature

Figure 11: WTP Distance Decay Functions Based in User and Non-User Elasticities in the Literature

Figure 12: WTP Distance Decay Functions Based on Income Elasticities in the Literature

We will be working to integrate these WTP distance decay functions into AutoCASE in the coming months.

[1> “Aggregating the benefits of environmental improvements: distance-decay functions for use and non-use values”, Hanley, Schläpfer, Spurgeon, Journal of Environmental Management 68, 297–304, 2003

[6] Note numbers have been changed from the eftec case study that has annoying inconsistencies and errors in it.

[8] In economics, elasticity is the measurement of how responsive an economic variable is to a change in another. In this case it measures the percent change in WTP from a 1% increase in distance.