Traffic Deaths – TO, NY, and Sweden

The research staff at Impact Infrastructure are looking at the benefits of transit and active transportation. The cost of accidents from cars is staggering. One component of the cost is the value of human life.

Are “traffic fatalities are the price we pay for the social good of transportation?”1 an article in the Toronto Star this weekend asks “More traffic deaths than murders – where’s the outcry?”

A couple of news articles this week describe how different cities are valuing the cost of lost life from traffic accidents.

Trends are not good2, TO experienced a 43 per cent increase in traffic fatalities over 2012: 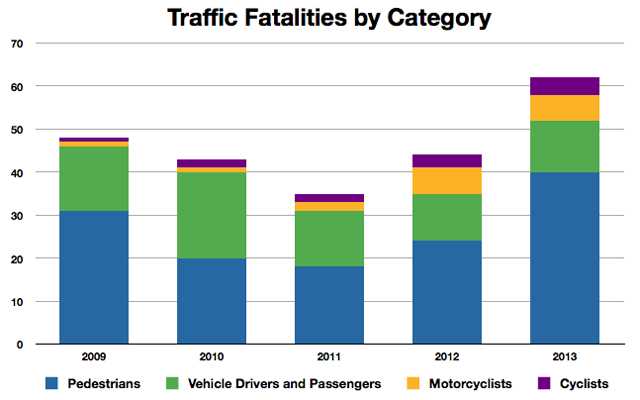 A report by Toronto’s chief medical officer of health made the case for active transportation infrastructure and pedestrian and cyslist safety.

“Toronto Public Health undertook a comprehensive examination of the health benefits and risks of active transportation (such as walking and cycling). … By improving safety for pedestrian and cyclists in Toronto … the total economic benefits of active transportation in Toronto range from $130 million to $478 million. … This report concludes that increased investment in the safety, attractiveness and feasibility of walking and cycling will help to improve health. While priority attention needs to be directed to enhancing and expanding pedestrian and cycling infrastructure, there are many other lower cost measures that the City can implement such as lowering speed limits and implementing traffic signal systems that provide advanced crossing to pedestrians and cyclists. ”

While the result was a call for “the possibility of a pilot program”, councillors were dismissive3 and our famous Mayor Ford suggested the chief medical officer of health should be fired.

New York has had the same trend in traffic deaths as Toronto but much more active response.

NY Mayor Bill de Blasio wants to bring the number of traffic deaths in New York City from around 286 last year to zero in 10 years.

“Just two weeks after taking office, New York City Mayor Bill de Blasio began to follow through on a major campaign pledge to improve his city’s traffic safety record. At a news conference last Wednesday, he announced an ambitious goal: bring the number of residents killed in automobile collisions to zero. … 11 New Yorkers had already lost their lives between the time of de Blasio’s inauguration on Jan. 1 and his press conference 14 days later.”

The US DOT’s guidance on the value of a statistical life is $9.1 million5. I suppose since a New Yorker is worth 2 1/4 Torontonians NY’s emphasis is justified. And with the Loonie falling, the relative price of New Yorkers is going up.

”Departing from the conventional idea that life can be assigned a monetary value, Sweden’s plan is built on the belief that the sanctity of human life takes priority over all other considerations. Safety is not balanced against factors like the need for speed or a desire to use the cheapest available infrastructure; it is paramount.”6

“The Vision Zero is the Swedish approach to road safety thinking. It can be summarised in one sentence: No loss of life is acceptable. … Transport systems are traditionally designed for maximum capacity and mobility, not safety. This means road users are held responsible for their own safety. The Vision Zero Initiative takes the opposite approach. We place the main burden for safety on system design”7

Toronto, New York and Sweden have interestingly different policies based on the economic evidence of the value of life.

1 “Blood on the streets, and on our hands” by: Edward Keenan, January 22, 2014, http://www.thegridto.com/city/politics/blood-on-the-streets-and-on-our-hands/

2 “Toronto’s Bad Year for Traffic Fatalities – Toronto had its worst year for traffic fatalities in nearly a decade—especially for pedestrians—and nobody’s quite sure why.” by: David Hains, January 16, 2014, http://torontoist.com/2014/01/torontos-bad-year-for-traffic-fatalities/

8 The value of a statistical life in Sweden: a review of the empirical literature. http://www.ncbi.nlm.nih.gov/pubmed/23084655