From Excel to Autodesk – Working the Business Case into Design

In the past year, Impact Infrastructure, LLC has released the Business Case Evaluator (BCE) for Stormwater Management and has completed the prototype for the Business Case Evaluator for Transit. These modules have been affiliated with the Institute for Sustainable Infrastructure’s (ISI’s) EnvisionTM Rating System as both systems aspire to become the industry standard tools for sustainable infrastructure rating and cost-benefit analysis.

Cost-benefit analysis is commonly used by governments, organizations, and project owners to prioritize funding, provide transparency about a project, and communicate value. In recent decades, these analyses have been run on an individual case by case basis. Consulting firms have been paid tens of thousands of dollars to continually “reinvent the wheel” and produce business case analyses for infrastructure projects. However, this need not be the case. The fact of the matter is that the processes and methodologies involved in creating these analyses are almost always the same.

To make matters worse, there is the subject of comparability. If models are continuously being recreated, updated, and tweaked slightly, there is a lack of comparability between projects. For example, if a design for a bridge is run through a cost-benefit analysis from one organization and it achieves an annualized ROI of 14%, and a design for a stormwater management system is run through the cost-benefit analysis from another organization, achieving an annualized ROI of 16%, can an investor or government really decide which one might be more beneficial? The end result is an apples to oranges comparison, erasing any potential of project investment prioritization. This is the way it is because, simply put, there has been no better alternative up until now.

Impact Infrastructure is making progress towards changing this. With the release of the BCE in the fall of 2013, Impact Infrastructure immediately began the development of a software version of the Excel model. The software version is called AutoCASE and it is targeting a commercial release in the summer of 2014. AutoCASE aims to have functionality that is not present in the BCE, including cost and scheduling risk analysis, dynamic modeling (e.g., modeling and incorporating the uncertainty in future climate data into the software), enhanced comparability across projects and designs, and integration with Autodesk’s infrastructure design software.

With the summer release this year, AutoCASE will have integration with Autodesk’s Civil 3D software, enabling it to extract design information from a project and incorporate that information into the business case of the project. This means that as an engineer or designer is working on the design for a project, AutoCASE can update the financial metrics and value of the costs and benefits of the project in real time.

An example of selecting a Green Infrastructure (GI) design feature from within Civil 3D.

Once all of the project’s GI features are selected and any additional relevant information is entered into AutoCASE, the project’s Sustainable Net Present Value (SNPV) can be calculated with the click of a button. Using this Sustainable Return on Investment (SROI) Process significantly enhances the green versus grey infrastructure decision-making process. 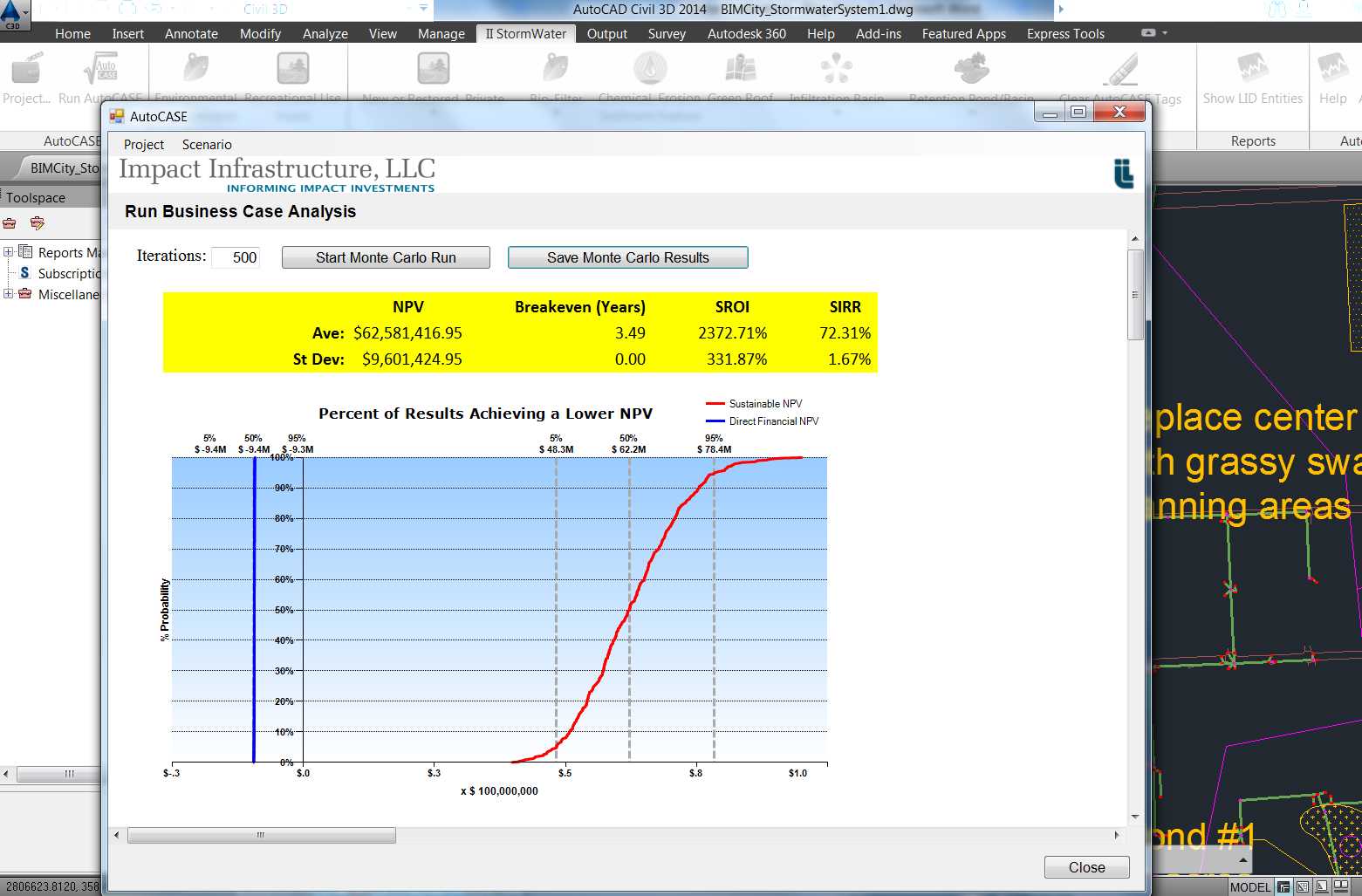 As Impact Infrastructure develops BCEs for Transit, Highways and Bridges, Social Infrastructure (e.g. hospitals, schools), and other types of infrastructure, AutoCASE software versions with enhanced capabilities will also be released. Unlike the standalone BCEs, AutoCASE’s infrastructure modules are fully integrated and run on the web. In addition, projects that are run on AutoCASE are sharable and stored centrally on the cloud.

AutoCASE is starting with plugin capabilities for Autodesk’s Civil 3D software, but is aiming to launch a plugin for Autodesk’s Infraworks software by Q4 of 2014, with plugins for other software design applications to follow. Plugins for new applications will allow for enhanced levels of automation, improved aesthetics, ease of use, and ultimately increased adoption so that cost-benefit analyses can become commonplace throughout the planning, design, and construction stages of every infrastructure project.

AutoCASE will be presented at the GLOBE Conference, taking place on March 27th in Vancouver, British Columbia by three of Impact Infrastructure’s Founders, John Williams, John Parker, and Ryan Meyers.