The urban heat island effect refers to the elevated temperature of large urbanized areas, compared to the surrounding rural areas, due to the concentration of human activities and dark impervious surfaces (such as asphalt). Urban areas are, on average, 6 to 8 degrees Fahrenheit warmer than surrounding rural regions [2]. In the evenings, the difference can be as high as 22 degrees Fahrenheit [3]. As the temperature increases people tend to consume more energy for air conditioning to cool down. In fact, studies have shown that a 1.8 degree Fahrenheit of environmental warming will increase cooling energy demand by 5 to 20% [4].

With a rise in temperature due to the urban heat island effect, higher electricity demand for air conditioning has a detrimental effect on the environment. The graph below shows that about 67% of the electricity generated in the US in 2014 was from fossil fuels (coal, natural gas, and petroleum), the most prominent source being coal at 39% [5]. It’s important to note that this is highly dependent on location, as the US is made up of several electrical grids, each with different sources and emission levels. However, the aggregate effect indicates that a sizeable share of electricity generation is from sources that produce a large amount of air pollution and greenhouse gases. The additional electricity usage for air conditioning is also a serious threat to the environment. In an average air-conditioned home in the US, air conditioning uses over 2,000 kilowatt-hours of electricity per year, causing power plants to produce about 3,500 pounds of carbon dioxide and 31 pounds of sulfur dioxide [6]. 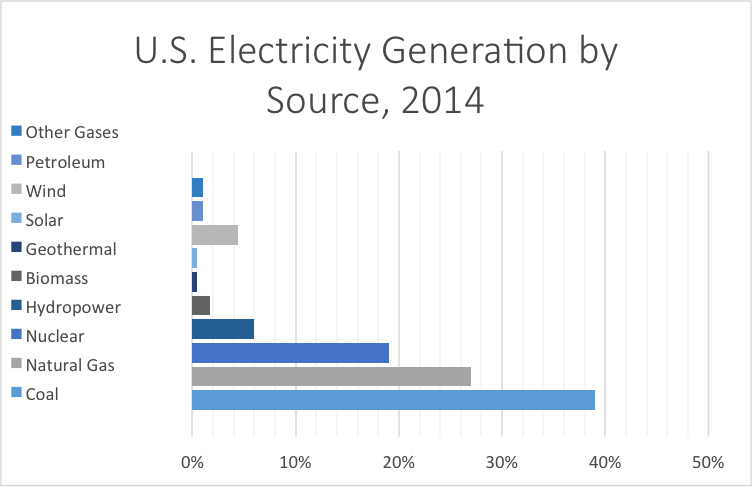 In a sense, the impacts of the urban heat island are actually growing due to the snowball effect. Its high temperatures lead to more energy consumption, causing a higher concentration of greenhouse gases, which causes global temperatures to elevate even more. In turn, this increases air conditioning demand to increase, and the process repeats itself indefinitely (albeit with ever diminishing impacts).

A proven solution to reducing inner-city temperatures is by adding greenery and vegetation to your city. In AutoCASE, we already model the change in temperatures due to an increase in greenery for a variety of land cover types. The temperature impacts by land cover types can be found here [http://www.impactinfrastructure.com/blog/UHI/]. One of these land cover types, green roofs, has the ability to sequester greenhouse gases, improve air quality, capture and treat stormwater, directly cool the interior of the building (reducing building energy use), and reduce local air temperatures by mitigating the urban heat island effect. We’re currently working on an addition to AutoCASE where we map this reduction in local air temperatures to a change in energy usage.

To illustrate how this model will work, let’s consider a project where the City of Pittsburgh decides to convert half of the rooftop space in the city to green roofs. This would decrease the average ambient air temperature in the city by approximately 0.5 degrees Fahrenheit. According to a study by Santamouris et al. (2015), who summarized several studies which analyzed the relationship between temperature and total electricity consumption, this should lead to a 1.3% reduction in annual city-wide electricity use [7]. For the City of Pittsburgh, this reduction equates to electricity savings of (roughly) 50,000 MWh/year [8]. At the city’s (2014) average price for electricity of $0.13 [9] this means that greening half of the existing rooftop spaces in Pittsburgh would result in an annual cost savings of $6.3 million [10].

The urban heat island effect is a snowballing problem that is threatening the sustainability of metropolitan areas all over the world. Studies have consistently shown that adding green roofs, cool roofs, cool pavements, trees or other types of vegetation have significantly played a role in reducing the urban heat island effect. Cities have begun realizing the benefits of implementing green roofs, with 8.5 million square feet installed in the US as of June 2008 [11]. Being able to better analyze the various benefits green roofs provide will lead to an even larger uptake of this alternative roofing method. And with more buildings adopting these green alternatives we can significantly improve the environmental, economic, and health conditions of our urban communities.

[7] Santamouris, M., et al. “On the impact of urban heat island and global warming on the power demand and electricity consumption of buildings—A review” Energy and Buildings 98 (2015) 119-124.

[10] When we add this model to AutoCASE we will also incorporate the uncertainty in these calculations using a Monte Carlo simulation.