I heard a Freakonomics pod cast recently that described the Internet as an infrastructure project but with no “price”:

And it took some time to realize that there is no people who run the Internet, and therefore there is no bill, … it’s infrastructure that everybody pays for and everybody gets to use.[1]

DUBNER: … do you have any kind of … dollar figure in terms of overall economic value? SHIRKY: I don’t.
DUBNER: But we’re talking trillions of dollars.
SHIRKY: Easily.[2]

“Measuring the economic impact of all the ways the internet has changed people’s lives is devilishly difficult because so much of it has no price.”[4]

One approach to determining value is to use the monetary transactions. Gains and losses are measured in GDP, but this is not full value or welfare. If consumers are willing to pay $50/month for high speed Internet and only pay $20, The difference, $30, is a non-monetary benefit called “consumers surplus”.

The Internet activity that is measured in GDP excludes this consumer surplus. For example: Google’s ad sales significantly understate the contribution of the Internet to welfare and the losses to encyclopedia publishers from Wikipedia does not capture its value to users.

Ask People What They Are Willing to Pay

Value The Leisure Time Spent On The Web

Dealing With Differences of Opinion

While these methods are illustrative and there are other ways, if you are a policy maker and want to decide how much bang for your buck sponsoring rural Internet gets you what number(s) do you use to help you decide?

The range is quite large – $3 billion to $564 billion. In another post (see Can Guidance Be Provided on Risky or Contentious Input Values?) I have discussed how, when you have lots of studies and estimates, you can use meta-analysis and risk analysis. Even when you have little information (say the four estimates above), risk analysis can come to the rescue if you are willing to make a few assumptions. One approach is to use all of them and to discount the outliers (Consumer Surplus and the Value of Leisure estimates ) and give more weight to the middle of the range (Survey and Time Saved estimates). 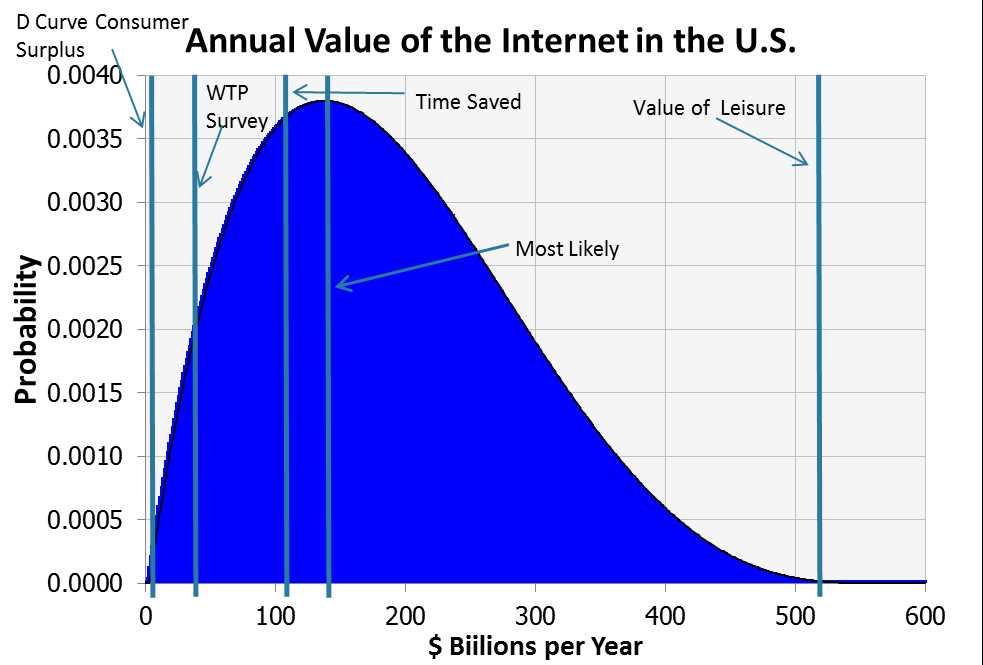 [3] “How to quantify the gains the internet has brought to consumers” – The Economist March 9th 2013 http://www.economist.com/news/finance-and-economics/21573091-how-quantify-gains-internet-has-brought-consumers-net-benefits