The Co-Benefits of Climate Action

The Economist strikes again – “Encouraging climate action – Try jam today – Policies to slow down warming may be more attractive if framed as ways of speeding up growth” Sept. 20th 2014 with news of “a report arguing not that global warming will destroy the Earth, but that much of what is needed to reduce its risks would be a good idea anyway.”

“The GLOBAL COMMISSION, advised by some of the WORLD’S LEADING ECONOMISTS, sets out a ten point GLOBAL ACTION PLAN for governments and businesses to secure better growth in a low-carbon economy.”

The Economist summary of the report (downloads) mentions the need for better infrastructure policies:

“Cities and their inhabitants’ consumption account for about 70% of global emissions. They are also where almost all the world’s net population growth will occur in the next 20 years. For leaders of middle-income and poor countries getting urbanisation right is already critical. The report says “getting it right” means encouraging cities that are dense, not spread out, with good public transport, not clogged highways. Sprawl wastes money. It ends up subsidised through the provision of more extensive systems of roads, sewers and the like; it reduces the gains in productivity that agglomeration provides. The report reckons that sprawl costs America $400 billion a year and quotes research from China that says labour productivity would rise 9% if its cities were denser. The authors reckon better infrastructure policies would lower the capital requirements of urbanisation by $3 trillion over the next 15 years and be popular, too (riots in Brazil this summer were partly over the poor quality of urban services). Happily, they would also cut greenhouse-gas emissions by the equivalent of 1.5 billion tonnes of carbon dioxide a year, mainly because commuters would switch from cars to public transport (or bicycles).”

In terms of the co-benefits of carbon reduction mentioned here, another example is that “coal also kills a lot of people. Outdoor air pollution, largely from coal though also from cars and other industry, kills 4m people a year, more than any infectious disease, and in so doing has huge economic effects (see chart)” 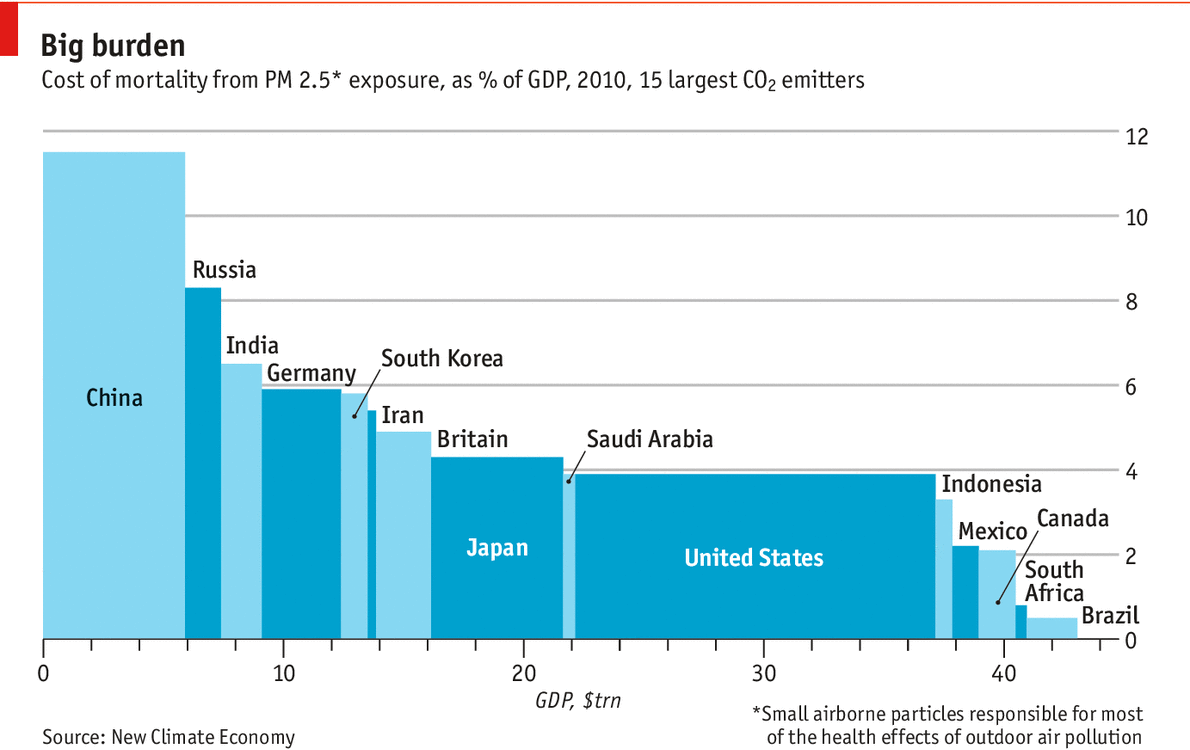 I was glad to see Canada towards the bottom of the chart. Hydro and nuclear are a big reason for this (see last post on policy and the impact these fuels have on carbon emissions). The Ontario coal phase out (long postponed) will help. The difference in electricity generation fuel mix between Canada and the U.S. was highlighed when we were getting data for emissions of CO2, NOx, and SOx for Canadian provinces for addition to AutoCASE. The numbers per MWh of electricity generated were much less than the U.S. state data. Too bad the prevailing westerly winds from the U.S. Mid-West blow straight to coal-free Ontario.

The Economist reports: “The authors argue therefore that some of the $45 trillion of infrastructure spending needed to keep up with energy demand in emerging markets over the next 15 years should go on encouraging low-carbon renewable forms of energy.” Hopefully some is of the U.S. investment is directly west of Ontario.