This is the last installment of a four-part blog post on CBA-BIM(Review: 1, 2, 3). Today, I’ll talk about how CBA-BIM can be used for informed, socially equitable, and defensible sustainable infrastructure and resiliency decisions.

Currently planners, engineers, architects and designers make many decisions that affect the sustainability of a project without the aid of a business case, or even a consistent set of data. CBA-BIM provides the standard framework and data to make consistent, sustainable and value-enhancing decisions.

For example, tree density, often easily available and able to be pulled into a BIM model, affects the urban heat-island effect. Temperatures in excess of a certain threshold can kill people. Population density layered on top of tree density allows economists to put a value to how trees reduce the number of people dying from excessive heat events.[1]

In CBA-BIM transit locations, trail and bike path information can be overlaid with income, health[2], and job information. Low income neighborhoods can benefit from increased access to job opportunities when there is an improvement in transportation; this benefit can be quantified. So can the economic value of reductions in obesity rates or diabetes risk that can result from increased access to transportation or increased recreational use space. 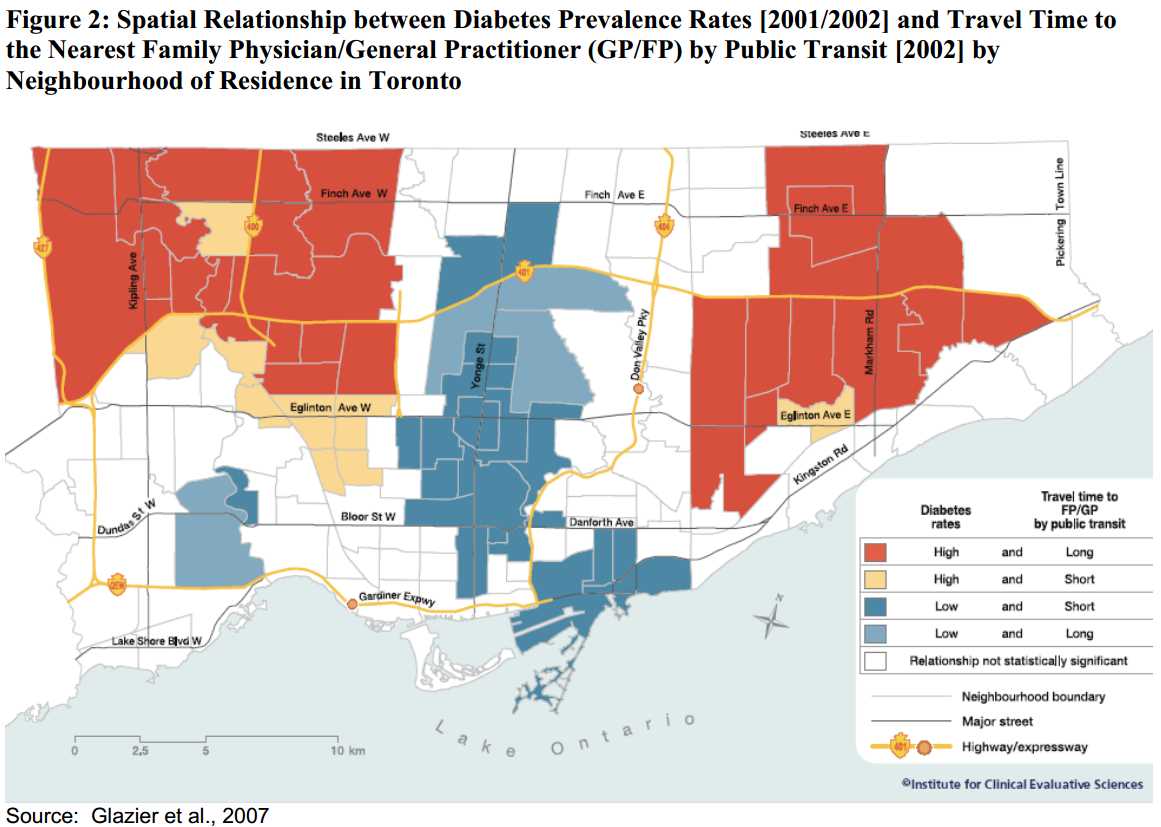 Next Stop Health: Transit Access and Health Inequities in Toronto

“Access to public transit contributes to the health of individuals, neighbourhoods, and to the city overall. The importance of public transit in Toronto is evident in residents’ high usage rates to commute to work compared to other Canadian cities. This is particularly true for lower income commuters who are more dependent on public transit to get to work than their higher income counterparts. … The availability of transit also has an impact on low income residents’ ability to access important goods and services such as food, health care, employment, and recreation, all of which impact their health.” Next Stop Health: Transit Access and Health Inequities in Toronto

By simply placing a new transit stop in a BIM model and triangulating the distances to job prospects and health-care centers, economic benefits and health benefits can be calculated, monetized and compared with costs. When infrastructure’s benefits to public health, the economy, and disadvantaged groups are considered, EnvisionTM’s purpose is being realized:

“Its purpose is to foster a necessary and dramatic improvement in the performance and resiliency of physical infrastructure across the full economic, social, and environmental dimensions of sustainability.”[3]

One study[4] found that it was more likely that toxic waste dumps were sited in poor neighborhoods than low income people moving to where these sites were because of lower house prices.

Interesting equity issues are raised[5] by authors who examine the extent to which inequalities in transportation noise exposure are present. Disparities were observed in estimated noise exposures and levels of socio-economic deprivation. The same authors[6] have studied air pollution. They find the overall distribution of the non-immigrant, native ethnic group (labelled as ‘>90% White’) enjoys substantially lower levels of pollution than does the Afro-Caribbean group. Also, while both non-immigrant and some immigrant groups respond to improvements in personal socio-economic circumstances by relocating to lower-pollution neighborhoods, there ae other groups are less responsive to such improvements.

Distance and noise effects are also dealt with in the Debrezion rail study referenced above.

Similar to the geographical impacts of noise of different socio-economic groups, local pollution has different economic damage costs depending on where the pollution is emitted and where the people, buildings, and crops are. In dense urban areas, damages to health and buildings are more than in less dense urban environments. Damages to health and buildings in rural locations are less again. For projects that change pollution, BIM allows local air quality to be modeled based on the number of trees, distance to pollution source, elevation, density and value of people, buildings, and crops. It can show which neighborhoods benefit and by how much.

The CBA-BIM framework is a combination of existing and available tools. CBA-BIM’s use in planning and designing sustainable and resilient will mean that the value of infrastructure, its sustainability, and its impact across different groups can now be reliably be estimated and incorporated into the planning and design process. Armed with this information, decisions that are good for the environment, society and neighborhoods can be made.

Extending the monetization of the EnvisionTM’s Quality of Life credits to give them a geographical dimension in CBA-BIM further builds EnvisionTM’s usefulness to the infrastructure community.

[2] For example in Toronto: “Spatial Relationship Between Diabetes Prevalence Rates and Travel Time to the Nearest Park or Schoolyard by Public Transit”