There are annoyances to living in Canada. Being the lesser, poor, cousin of the US (or as Bike Snob NYC says United States of America also known as Canada’s gratuitous undercoating etc.) we have to put up with deadlines and conference calls on Canada Day (July 1st) and then explain “Well it is like July 4th but on the 1st …”.

But there are benefits. On Independence Day, as email dries up to a dribble, there is the opportunity to squeeze in a lunchtime bicycle ride. 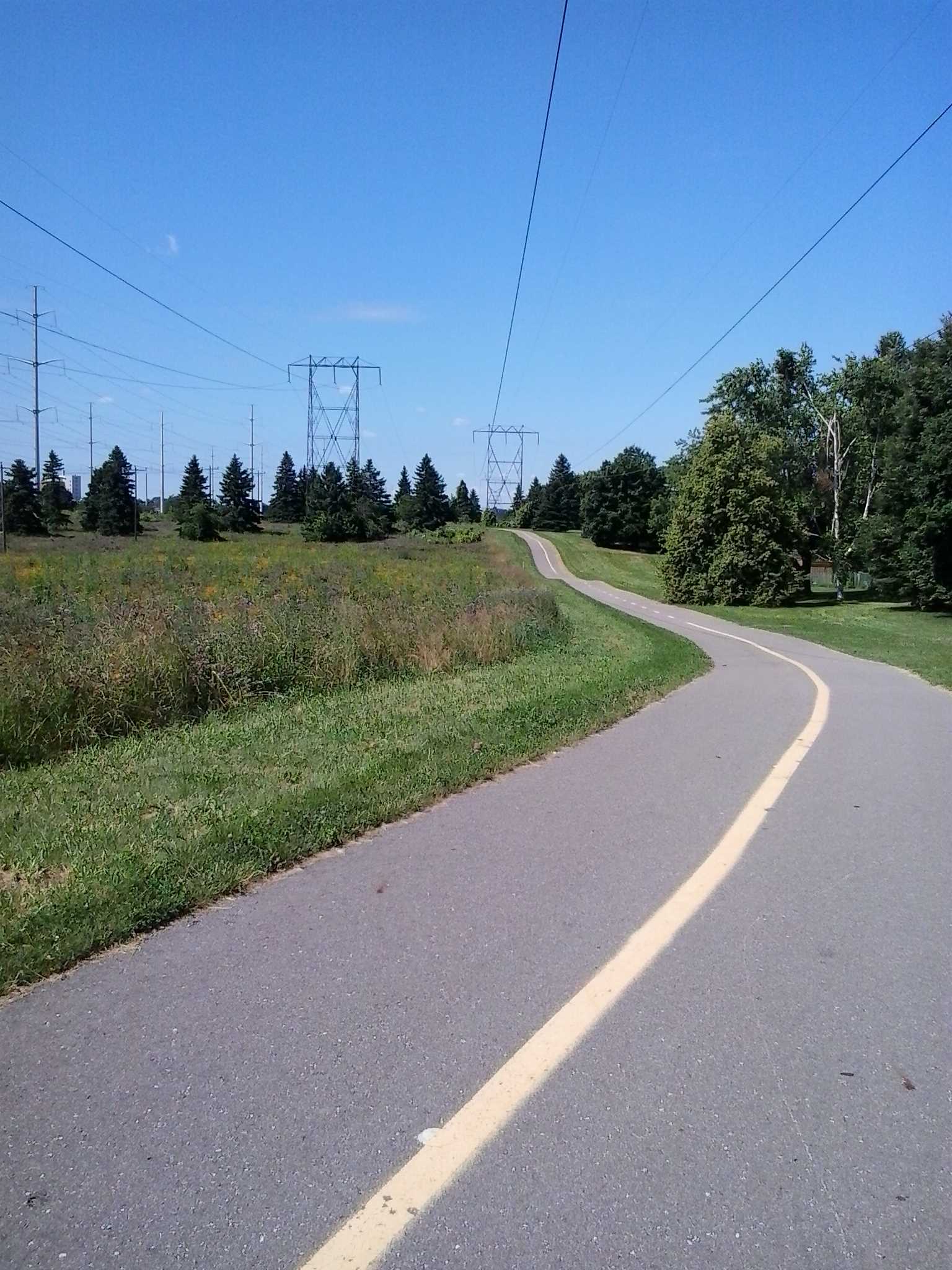 I have presented about willingness to pay for good recreational tails, such as the Gatineau Trail in a electrical transmission corridor (aka hydro corridor in Canada). Houses close by benefit from this permanent open spaces by being three times more valuable to local residents than those which are potentially available for development – Geoghegan (2002).Cyclists gain from the recreational/health benefit of these recreational trails.

The City of Toronto has been restoring meadows and they are in bloom now. The smell was wonderful both from the flowers but also further along were the meadows had been mowed and there was that fresh mowed smell that you usually only get in the country. 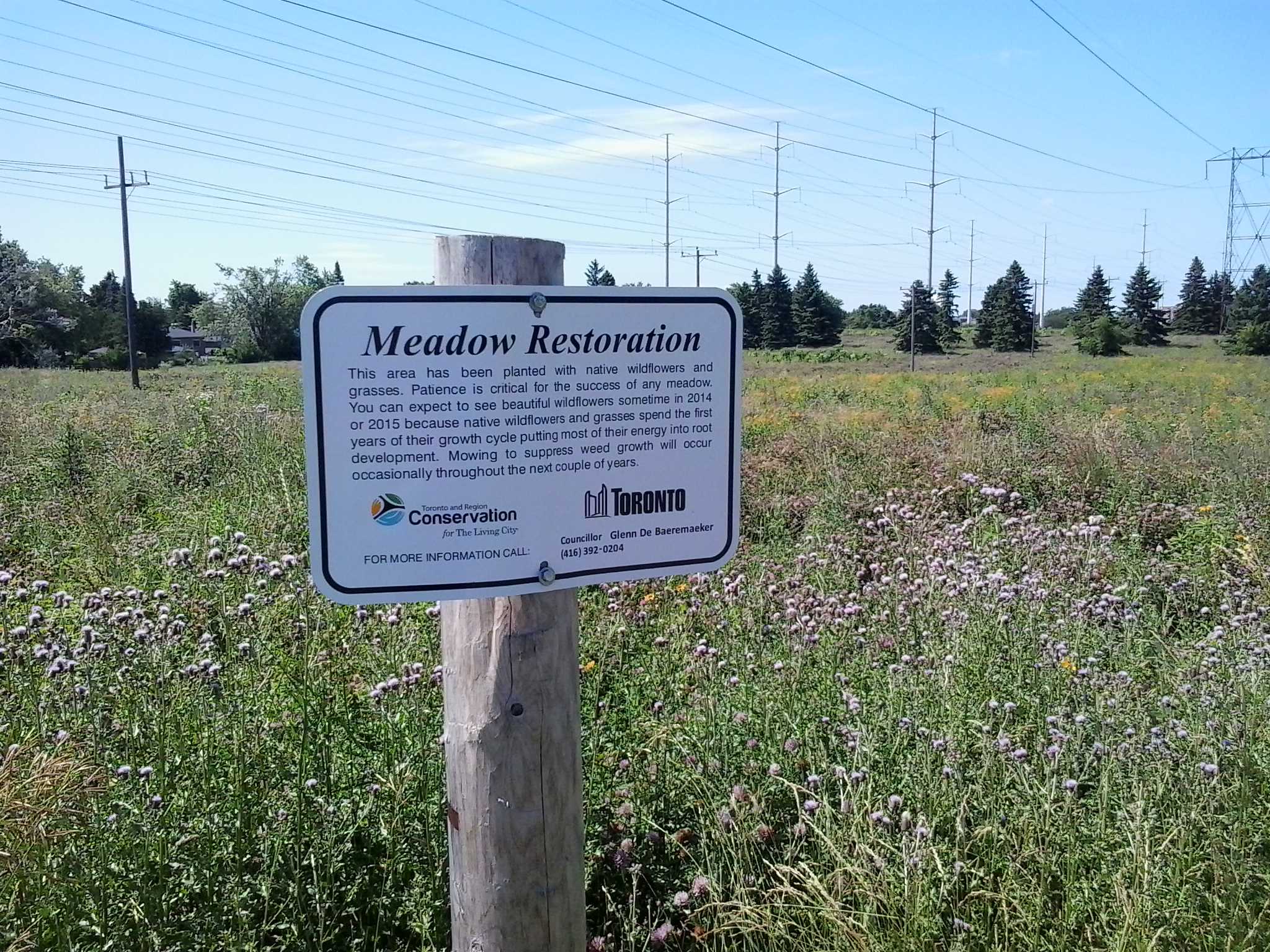 I was wondering, while riding whether the hedonic property value models included this “fragrance benefit”. I need to go a look up “fragrance” on EVRI (Environmental Valuation Reference Inventory) and see whether there are any studies that quantify these benefits that can be used in AutoCASE. I’ve see studies of WTP to avoid hazardous waste but not WTP to get smells. 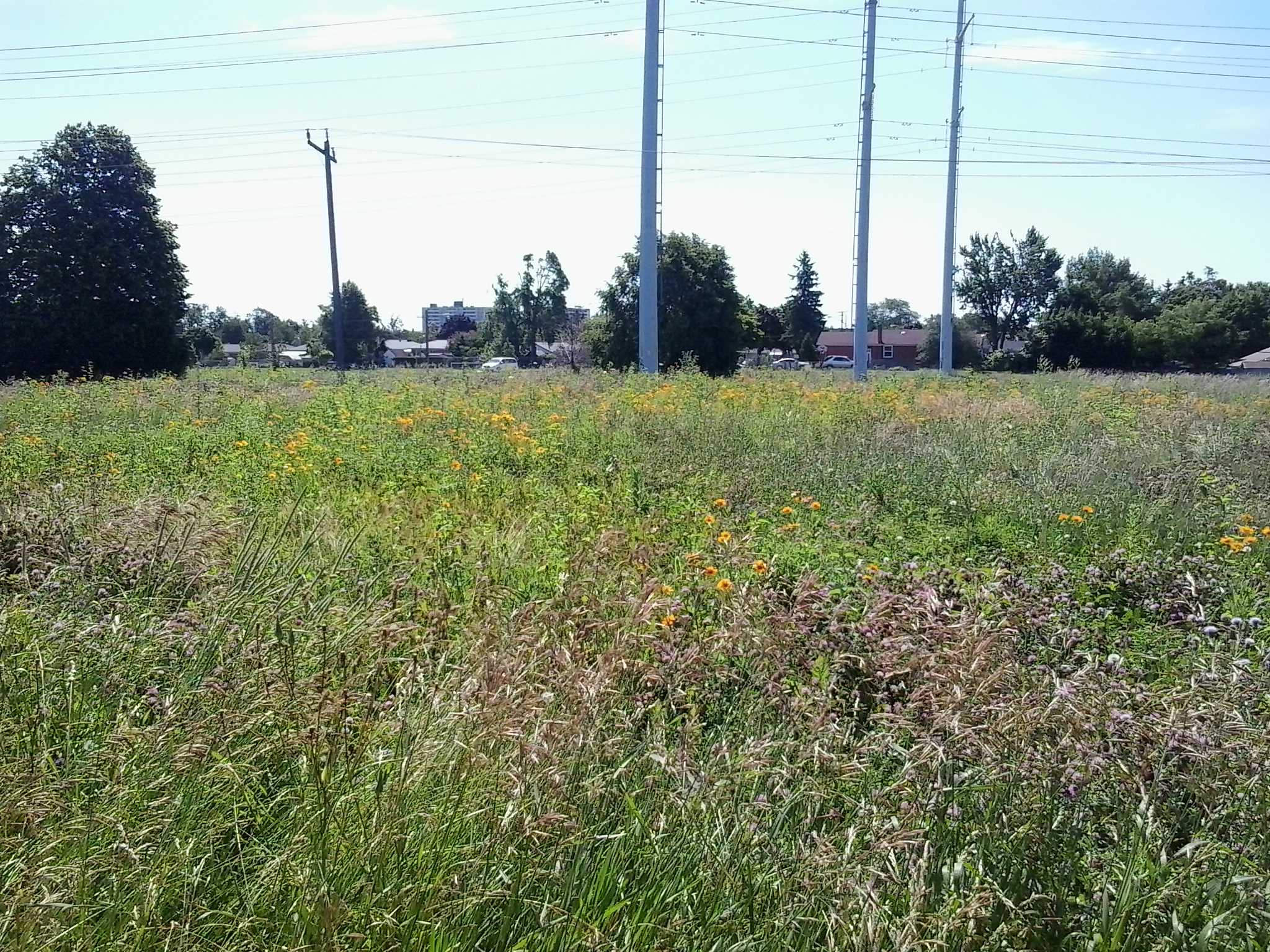 In terms of the bike infrastructure, while I’d prefer not slowing down for pedestrians on a shared bike path, I do realize that at only 2% of the population cyclists cannot expect more. And sharing is better than competing for road space with trucks and mad drivers.

Speaking of drivers, I find that the bike infrastructure at intersections, while designed for my safety as a cyclist, is not ideal. Cars and trucks seem to be more likely to run a red light at these trail crossing than at other intersections in the city. 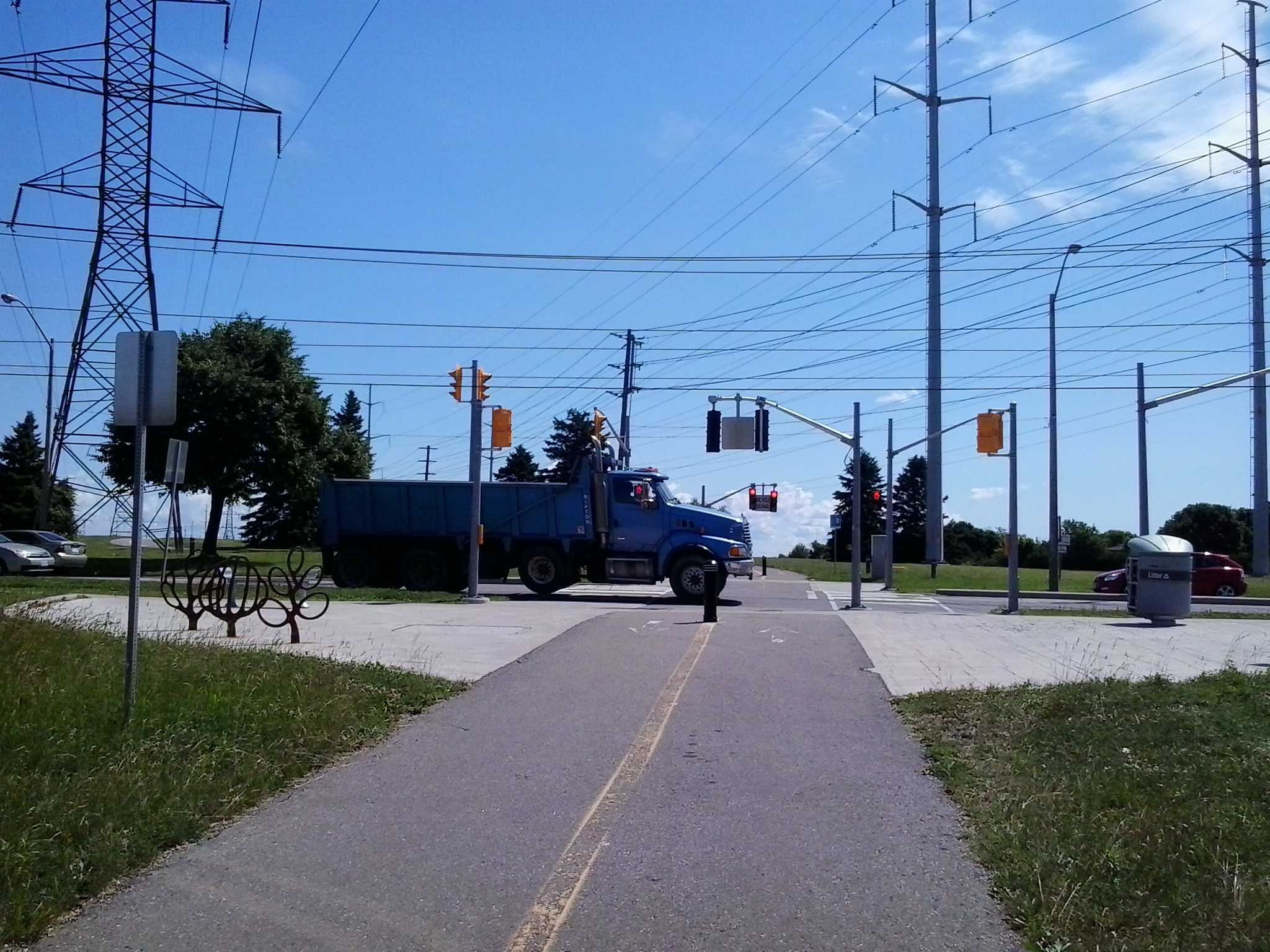 The intersections that work are on the lesser traveled where both cyclist and cars know that it is a free for all. The City has done a good job of signalling the crossing on the streets with a different road surface, narrowing the road (and a couple of signs). This type of subtle signals without rules gets people to slow down. 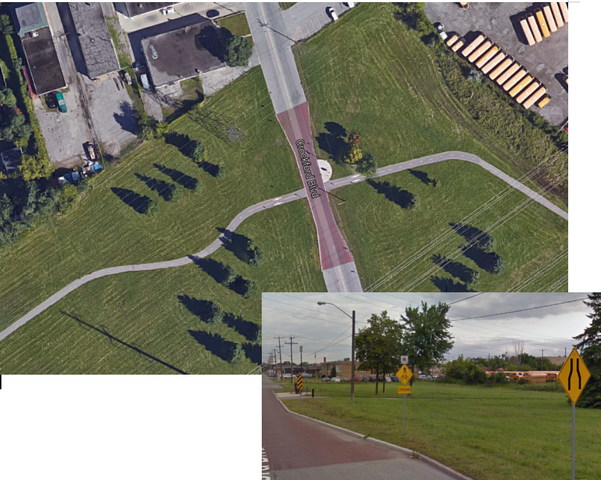 On the intersections with traffic lights for cars and bikes the city has, recently made the lights more responsive to the buttons cyclists and pedestrians push to be recognized by the lights. For some reason there are three buttons to choose from (two for pedestrians some 5m apart and one in the middle for cyclists. I usually push all three because they seem to be independent. My questions are, why three independent buttons, and why can’t the cyclist button be 100m back along the trail so that the lights change as you arrive there. Or better still a photo-sensor or and induction loop rather than a button. Speaking of induction loops, none of them at street intersections on the trail work. Oh well, can’t complain it was a nice day and I didn’t mind too much waiting to cross (not long ago I was chipping ice off my drive train) 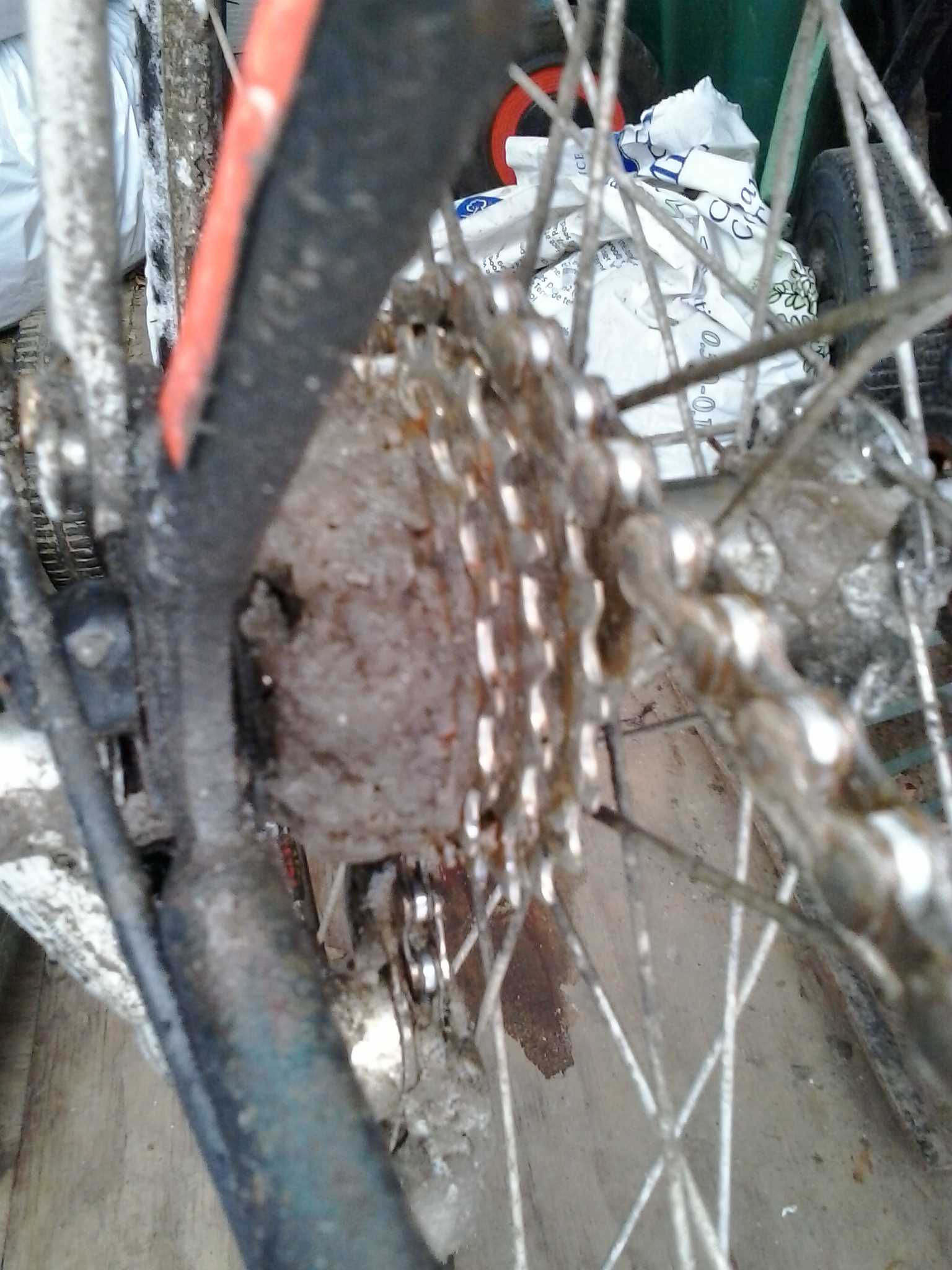 Not that long ago

UPDATE: what I’d realy like to do is to model these intersections using Autodesk’s Commuter software. Like this cool video. I have signed up for the Project Commuter for Infraworks 360 trial.

Once in a while you have to take advantage of foreign holidays and get outside and smell the city’s meadows.

The smell was so nice that I had to go back the next day and do it again. 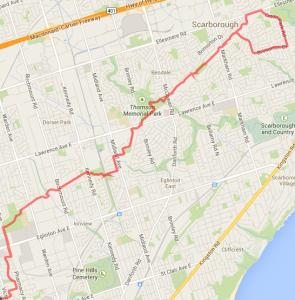