I Got My Feet Wet Today

I got my feet wet today. Cycling through the Don Valley to work today the trail was flooded. The obvious cause was the thunderstorm we had last night. The less obvious reason is that we have constrained the Don River and stopped it from going where it wants. By stopping it naturally flooding in one area, it floods somewhere else. 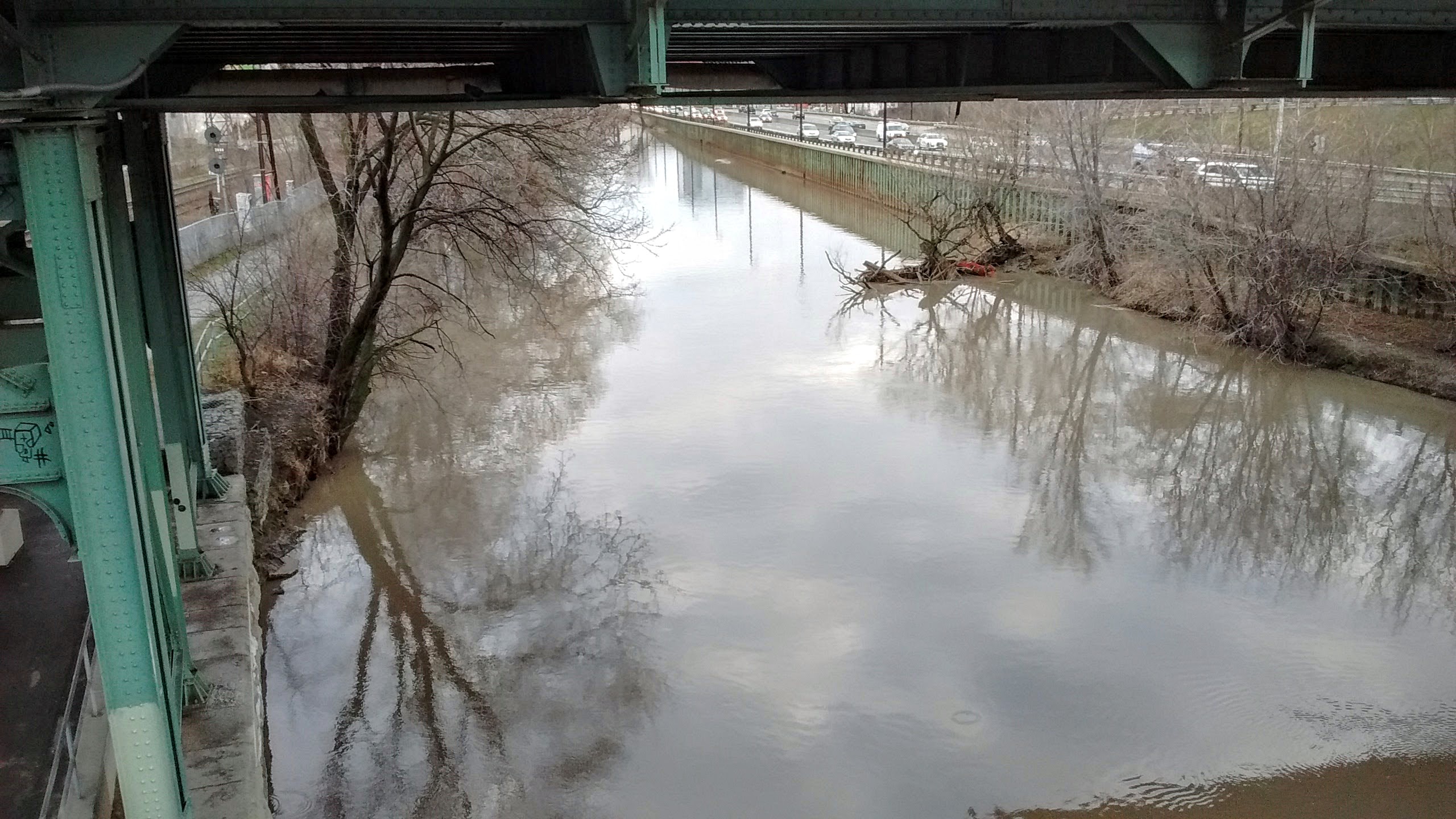 The Don River at Queen Street has only one place to go – up. There is not a lot natural about this river bank

Also we have taken away natural infiltration and retention of stormwater in Toronto and added more impervious surfaces. Grass, dirt and trees will clean water of pollutants, whereas ashphalt only makes it more polluted. All of this means the poor Don River gets more and dirtier stormwater. These effects are what we are measuring, quantifying and monetizing in AutoCASE. AutoCASE looks at the value of: stormwater systems; roofing systems; landscaping practices (trees, shrubs, etc.); roads and streets; permeable pavements, and more… It gives a comprehensive view of the financial, social, and environment costs and benefits and includes: carbon emissions, air pollution, flood risk mitigation, and urban heat island effect.

Sometimes the Don River floods onto the roads and rails and people get very upset. “In 2013, Toronto beat Hurricane Hazel’s one-day 1954 rainfall record and the flooding was enough to strand a GO Train and force its evacuation” (TVO – “How Toronto’s plan for the Don River shifts Ontario’s approach to waterways”). More usually it is just the cyclists, joggers, and dog walkers that have endure soggy socks.

“We really know that encasing rivers in concrete doesn’t work, and it can exacerbate all of the flood problems down-steam…rivers are complex systems that are more resilient to changing conditions than engineers once thought… While removing vegetation from river basins was seen as a way of reducing flood risks last century (because dense vegetation was blamed for obstructing the flow of water out from flood zones), more recently engineers have come to appreciate the roles that vegetation plays in preventing flood damage, for example by controlling the sediments in the river.” (TVO)

The Don takes a dog leg at its mouth with the Keating Channel: 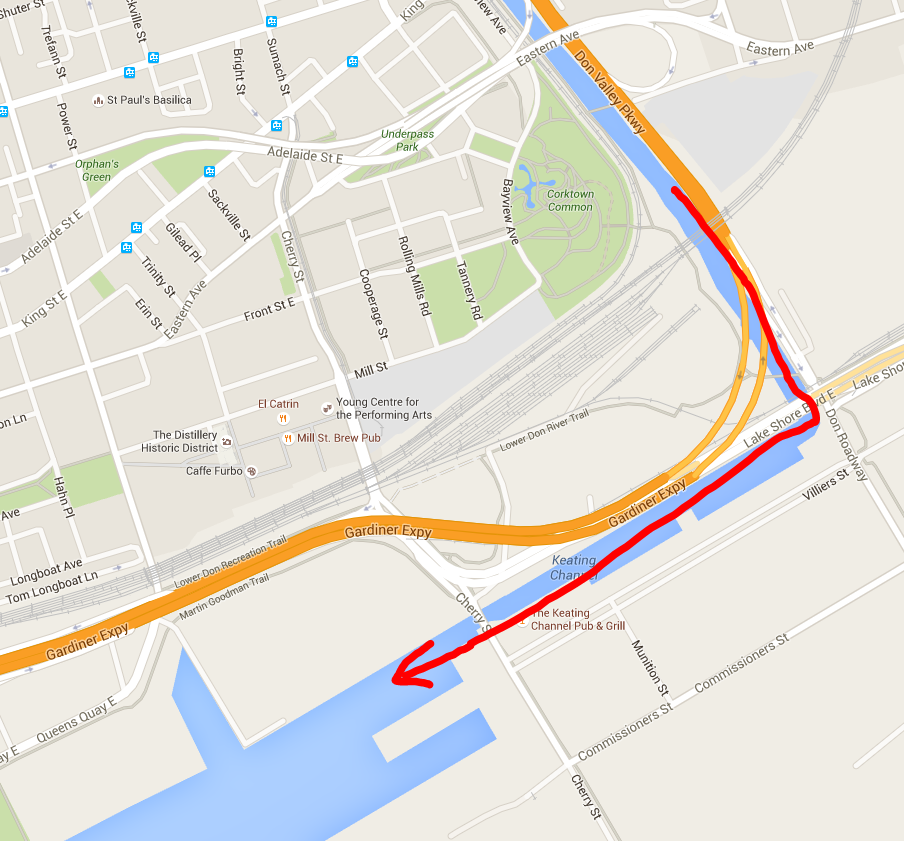 The rather unnatural dogleg left mouth of the Don River (Source: Google Maps)

“Things like the Keating Channel are single-purpose pieces of infrastructure, and we just don’t do things like that anymore, partly because we can’t afford it anymore.”(TVO)

There is a grand plan (unfunded) to re-naturalize the mouth of the Don River and build on the newly protected areas. 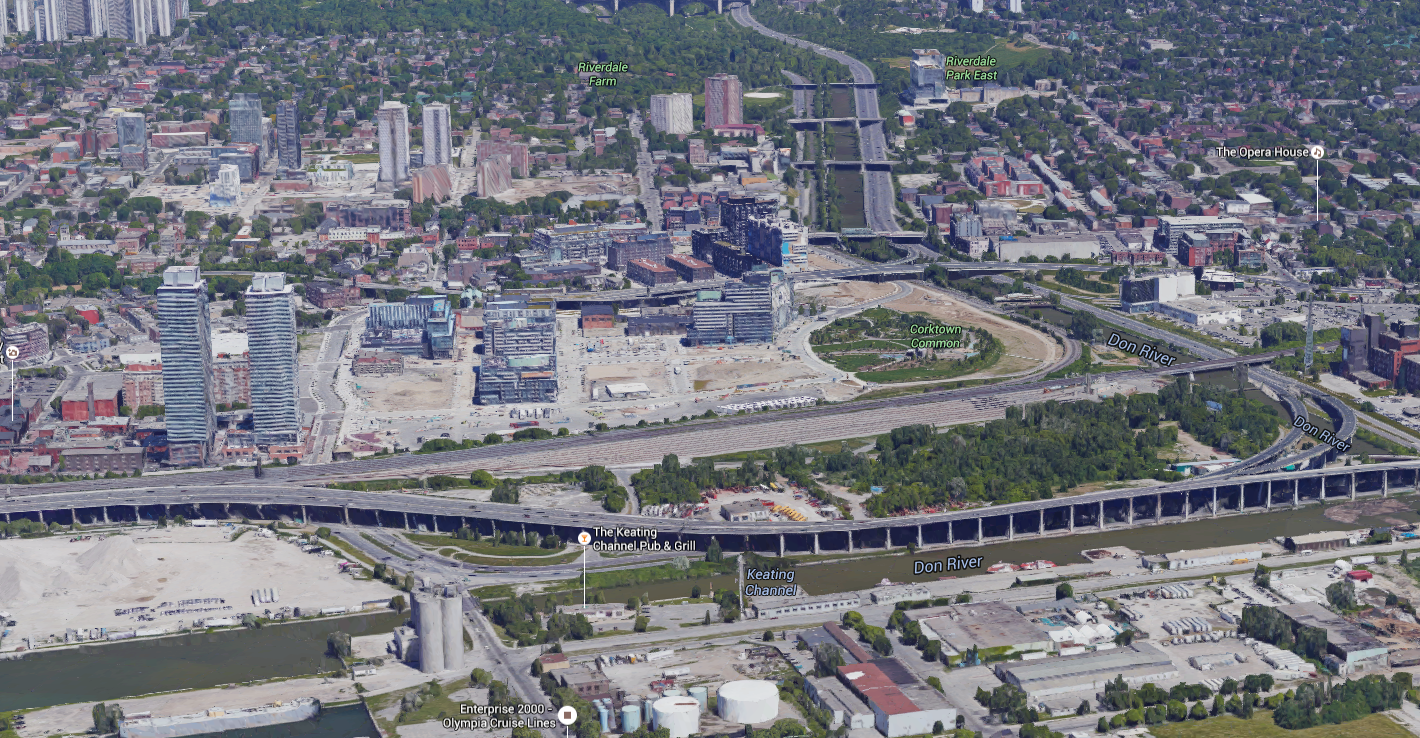 The environmental assessment is here. “290 hectares (715 acres) … are currently at risk of flooding from the Don River watershed, meaning flood protection is required before any redevelopment can occur. The solution to this challenge is to naturalize the mouth of the Don River to provide the necessary flood protection and to unlock the development potential of this premier waterfront area …The new Mouth of the Don River will remove the flood risk to 240 hectares of land. The majority of the remaining 50 hectares of land still at risk due to flooding are designed to be flooded as they are located within the Keating Channel and the new naturalized river valley system. The Don Valley Parkway will continue to flood north of Lake Shore Blvd to Eastern Avenue. The only solution to flooding of the DVP would be to rebuild this section of the highway, which is outside the project scope.” (Waterfront Toronto, “new mouth of the don river”).

Dry socks and re-naturalization are not cheap, “governments are budgeting at least $1-billion for roads, water, parks and rail improvements in this zone… The river is unruly, prone to powerful floods; a thoughtful, coherent landscape would mitigate the risks for infrastructure and serve the environment of the valley.” (The Globe and Mail, “A superpark hides in Toronto’s Don Valley, waiting to be discovered”.

Perhaps running AutoCASE first could have come up with a cheaper solution than $1 billion to manage Toronto’s soggy socks problem.