A Vision with Envision

Other tools, such as the Institute for Sustainable Infrastructure’s (ISI’s) EnvisionTM Rating System, exist to reveal these benefits in qualitative terms. EnvisionTM, similar to LEEDTM for buildings, is a points-based ratings system designed to orient infrastructure projects towards sustainable and resilient designs. As a relatively new ratings system, EnvisionTM plans to become the industry standard for sustainable rating systems in the infrastructure space. Simultaneously, leaders in the ISI have recognized the need for business case analysis as a partnering tool with Envision’sTM points-based system. 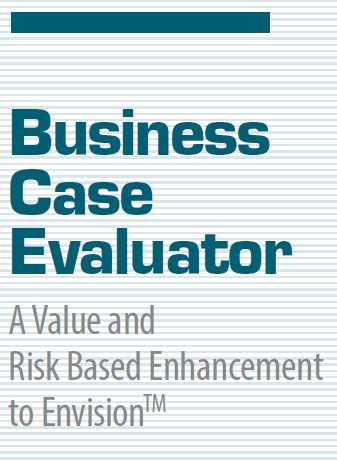 In September of 2013, founders from Impact Infrastructure, LLC presented the Business Case Evaluator (BCE) for Stormwater Management at Harvard University’s Zofnass School of Design to senior members of the ISI. The BCE is an economic companion tool to the EnvisionTM Rating System, and its primary purpose is to produce risk adjusted, dollars-based metrics for infrastructure projects based on costs, benefits, and design features. Simultaneously, the BCE also breaks down the value of a project among different stakeholder groups, showing which groups (e.g., government, residents, local businesses, and the environment) will be affected and to what degree. In addition, the BCE maps the value of a project between different EnvisionTM credits, showing how the value gets distributed within the EnvisionTM Rating System. The BCE uses a Sustainable Return on Investment (SROI) accounting framework to ensure the full value of the project is considered.

As an example of the BCE’s use, let’s pretend that the City of Toronto is designing a new stormwater management system. With EnvisionTM, the designers would answer several dozen questions about the project and its local impacts and design considerations. This may include the level of resiliency of the design, the degree of sustainable materials used, noise and aesthetic impacts on the local community, impacts on carbon emissions, and so on. At the end, the designers may be given a score of 98 points. This tells them that they achieved a certain level of sustainability, but what is the project’s true value? This is where the BCE comes in. By answering the additional questions in the BCE, planners, designers, and project owners can now also know the Sustainable Net Present Value (SNPV), Discounted Payback Period, and many other metrics reflecting the value of the project. What EnvisionTM lacks in quantitative analysis, the BCE brings in full force; what the BCE lacks in qualitative considerations, EnvisionTM has thoroughly covered. Together, they are a powerful sustainable infrastructure planning package.

As EnvisionTM continues to rise in popularity and adoption, the BCE aims to also expand in adoption, with the ultimate goal of becoming an industry standard that will allow consistency and comparability across projects.

The Business Case Evaluator will be presented at the GLOBE Conference, taking place on March 27th in Vancouver, British Columbia by three of Impact Infrastructure’s Founders, John Williams, John Parker, and Ryan Meyers.